The Importance of Humility

Earlier this month I told you that I would like to talk about humility. This quality is something I have been thinking about for a while; it is a characteristic that seems increasingly rare in public life and, at times, hard to find even though we all recognize and admire it when we see it. I am going to start by talking about a student who graduated from MBS two years ago. He is now nationally distinguished, at least in certain circles, and what is remarkable about him is his humility, especially given the fact that he is well known as an athlete.

He first visited MBS as an 8th grader who was on campus to take the ISEEs. He wasn't planning to apply to MBS, but he was so taken by the community, he decided to submit an application. Well, he was accepted and spent four years here. Initially, he identified himself as a student and swimmer. During the spring semester of his freshman year, he was looking around for something to do in the off-season, so he decided to play lacrosse. At the time, we had a good face-off guy--John Martin's older brother--and Trevor Baptiste became a valuable but unremarkable member of the team. In his junior year, he became the starting face-off guy, and he worked exceedingly hard to master the art of the faceoff and his trajectory was astounding.

During Trevor's junior year at MBS, I was talking to a friend of mine at my fitness club who is a lacrosse referee. He had just reffed a game of ours and all that he could talk about was Trevor Baptiste—not because of his talent but because of his attitude and approach to his sport. During the face-offs of this particular game, Trevor was moving his body or his stick, resulting in an infraction, and my ref friend kept giving the ball to the other team. As you may know, lacrosse is a game of possession so winning the faceoff is critical. Rather than complain, Trevor asked the ref to explain to him what he was doing wrong. With the ref's explanation, Trevor immediately adjusted his technique and proceeded to win the face-offs for the rest of the game. My friend was struck with his poise and humility.

In his senior year at MBS, Trevor dominated New Jersey lacrosse and was recruited to play at the University of Denver. 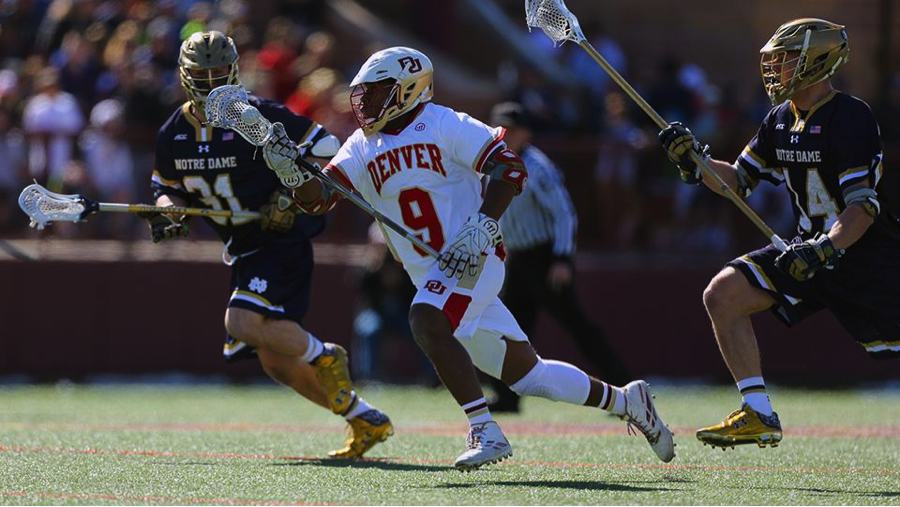 In his collegiate debut, Baptiste won 25 of 34 face-offs and picked up 14 ground balls in a 13–7 win against defending national champion Duke. He set the single regular season record for face-offs won by a freshman (259), topped all of Division I in face-off win percentage (68.6%), and helped the Pioneers claim their first national title in a 10–5 win over the University of Maryland.

At the end of the season, Trevor was named first-team all-American, he was featured in Sports Illustrated, and the editor of Inside Lacrosse, Terry Foy, was quoted as saying "I haven't seen any freshman come in and be so dominant. What he's doing is historic."

Last summer, I saw Trevor when he came to MBS to train with Coach Sal. I told him that I had not been able to watch the semi-final game, but that I had heard that Notre Dame made a huge comeback to tie the game in the waning minutes. I asked him about the game. Rather than blame the goalie or give credit to Notre Dame's offense, he said, "Yeah, Mr. Caldwell, that guy kept beating me in the face-offs." Trevor's humility and honest self - assessment was impressive.

Trevor ended up winning the final face-off of the game, and with that play Denver went on to win the national championship.


Political and cultural commentator David Brooks says "Humility is the awareness that there's a lot you don't know and that a lot of what you think you know is distorted or wrong." This obviously applies not only to the athletic field but to our every day lives.

Trevor's statement: "Tell me what I did wrong so that I can get better" is an approach we can all learn from in whatever we are doing whether we are working to improve as mathematicians, scientists, writers, historians, or speakers of a foreign language. In Thinking Fast and Slow Daniel Kahneman writes: "We have an almost unlimited ability to ignore our ignorance.

Knowing what you don't know is vital to your growth as a person."

When I was a young dean, I thought I had all the answers. As I have gotten older, I have developed wisdom, which is not a body of information. It's knowing what you don't know and figuring out a way to handle your ignorance, uncertainty, and limitation. Today, I have no problem asking colleagues for advice. That is why I surround myself with smart and capable administrators, faculty and staff. Hopefully, I am wise enough to know what I don't know and sensible enough to admit it and seek help when needed.

Humility is a modest view of your own importance. It is an awareness that you are not the most important person in the world. This is why social media can mess us up because it entices us to think about ourselves rather than other people when we spend our time tweeting, taking selfies or updating our facebook profile. Social media is often about promoting ourselves. Humility is about promoting others.

We saw a perfect example of when our boys' basketball team hosted a team of Special Olympians. Our players knew that this night was not about them. It was about the Special Olympians. Virtually every basket that was scored was done so by one of our guest athletes and the applause from the crowd was spontaneous, sustained and genuine. On that night our boys celebrated the athleticism, dignity and joy of a group of talented Special Olympians.

Finally, we have a sophomore ice hockey player who had quite a season and earned Player of the Year this year after earning Rookie of the Year the season before.

Here is what Ally Detre said in response to her award: "I am truly honored and frankly astonished to have received this award. There are so many talented girl hockey players in New Jersey, and I am happy just to be mentioned in the same conversation. I am also very fortunate to be able to play for Morristown-Beard and for coach Driver and his staff who are truly inspirational mentors. Hockey is the ultimate team sport and I would not have been able to achieve what I did this year without the entire team, especially my line mates. The degree of camaraderie the team shares is unbelievable, and it makes playing for the school even more special."


In 2015, the Stanford Graduate School of Business did a massive study on how business leaders rate themselves compared with how their employees rated them. What they found was the fewer skills the leaders over-rated themselves on, the more effective they were as leaders. The most effective business leaders had a combination of humility, high personal standards, and a continual striving to do better.

There is a reason that humility is embedded into our values statement. As I mentioned at the beginning of this talk, it is an attribute that is increasingly rare in public discourse. It is a quality that we must cultivate, nourish and applaud.